My Educational Journey by Maria T.

(Maria’s story as told during the 7th Annual Scholarship Dinner)

My mother, brother, and I came to St. Louis as refugees from Colombia. My father, a policeman, was killed in action during the Colombian drug wars, and because the drug cartel targeted families, our lives were at risk. When we arrived in the states, my family and I did not know English, and we faced many challenges. 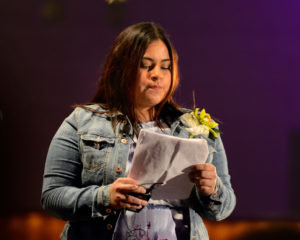 My educational journey began in the public school system. I attended second grade at a public school; however, I struggled due to the language barrier.

Fortunately, after meeting several other Hispanic families, we learned that St. Cecilia School and Academy had a great ESOL program.

I remember feeling very comfortable coming to St. Cecilia because there were several other students in my class who didn’t know English either.

My third grade teacher, Ms. Conte, made it her personal mission to help us learn English, and I had a competition with my classmates to see who would complete the ESOL program the fastest. I ended up completing it after my first year at the school.

The principal at St. Cecilia also helped my older brother get placed at Christian Brothers College High School, and he is now a student at Fontbonne University.

At home, my mother, who received a diploma in Columbia, found it to be of little use here so she had to work two low-wage jobs to provide for us. Her English skills were slowly developing during this time, and I remember translating for her when we would run errands or go grocery shopping.  However, my mom is very smart. She knew that education would provide a better life for us so she took GED classes in hopes of going to college and becoming a nurse.

As a young child, watching my mom make so many sacrifices, was hard, but the memories ingrained determination in me. If my mom could do it then so could I, and I wanted to be like her and make her proud by going to college. I just had to work hard to get there.

I was ready for middle school. At St. Cecilia, middle school students were given more responsibilities and opportunities to stand out. We wore different uniforms, changed classes, and started enrichment activities.

I knew that my day would be longer; however, I never expected it to be so much fun. For example, I learned how to step out of my comfort zone in a circus class.

I also learned that I had the power to be very influential through a video programming class taught by KDHX radio. I enjoyed the program so much I enrolled in KDHX’s summer enrichment program, and learned how to make commercials, take video, and use mac computers.

Through the NativityMiguel program, I was also able to attend the St. Louis University Summer Scholars program two years in a row. I went a third year and served as a Residential Advisor. I came back year after year because the Summer Scholars made going to college seem so easy, and I needed to believe that.

At home, my mother was now in community college, and working her way towards a nursing degree. She was also working her way up at Barnes Jewish Hospital. First, as a janitor, and then as a translator for Hispanic families. I remember her always being very tired, but she also told us hard work paid off.
Two important events happened during my middle school years are important to my story.

The first, was when my mom, after many years of being a single mom was able to find love again. She married, and I became a big sister to my step-brother.

The second, is meeting my Graduate Support Directors, Mr. Kelly and Mrs. Klosterman. Looking back, I did not realize my full potential, but they did. I did not know what high school I wanted to attend .

After shadowing both Nerinx Hall and Ursuline, I still wanted to go to Ursuline. However, Mr. Kelly and Mrs. Klosterman felt that Nerinx was a better fit for me so they sat me down and personally talked to me about my decisions. I remember them saying that my grades showed that I could excel at Nerinx and that my leadership abilities would be a good fit.

I was accepted to both. However, I chose Nerinx Hall after my interview. I met with the school’s Spanish teacher, and my entire interview was in Spanish. There was one point in the interview when she asked my mom to leave the room, and she asked me point blank if I wanted to go to Nerinx. I told her my story, and she said that the school would be a good match for me, and I believed her.

I am pausing here for a moment to say that St. Cecilia gave me a great educational foundation, but Nerinx was the icing on the cake. At Nerinx, I learned how to be empowered.

During my freshman year, I had a bit of trouble adapting to the school environment. I felt different because I was Hispanic in a predominately Caucasian school. However, I got involved and joined the Diversity Club, which helped me break out and find my voice.

Many students at the school did not know about Hispanic or Black culture; however, I learned that as a minority I could make a difference and teach my peers about stereotypes.

Nerinx let me be a leader, they let me experiment and question, they pushed me and challenged me, but most importantly they let me be me.

At home, my junior year was also rough. My stepfather was deported, and my mom was once again a single parent. My older brother was in college, I was in a private high school, and my step-brother, who stayed with us, was at St. Cecilia.

Schooling was expensive, but my mom was determined. We would get a good education. I knew I needed to help pick up some of the slack, and started working at Panda Express 40 hours a week.

Going to high school and working a full-time job was the hardest thing I had ever done.

This was the only time I ever really fought with my mom. I was so tired- I wanted to go to stop working , and school was getting harder as I was getting closer to finishing, I begged my mom to take me out and out me somewhere a bit easier but my mom refused . She told me nothing was impossible and even though it’s hard it was the right path for me. This challenge made me value my education on an entirely new level. I was paying for it. I was invested in it, and I was not going to fail.

My teachers at Nerinx knew I was struggling but still held high expectations of me. They would not take excuses, only solutions. Mrs. Klosterman stayed on top of me as well. I saw her a lot my senior year because I did not know about FAFSA and, due to having no money to pay for college, I did not know I had any college choices.

Mrs. Klosterman also set up college tours for me, and helped me with the application process. She made me feel valued.

I started receiving college acceptance letters around this time last year. My mom had this habit of opening up mail from universities that was not mailed to her. I remember coming home to a hysterical mom and opened letters on the dinner table. I have never been so over joyed to see my mom jumping up and done screaming “you did it!” I received acceptance letters to SLU, KU, UMKC, UMSL, and Rockhurst.

If you have ever been in the Graduate Support room at St. Cecilia School, then you know that there is a wall that lists the seniors’ names and where they have been accepted to college. Words cannot express how it made me feel seeing my name on that wall followed by not one, not two, but 5 colleges.

I knew then that my hard work had paid off, and that I was going places.

I chose Rockhurst University for several reasons. First, because I liked the small class size and the Jesuit education. I also received a good financial aid package, but what really stood out as was the nursing program.

My ultimate goal is to become an orthopedic surgeon, and I chose nursing because it is the cheapest and most realistic way to get there. The nursing program pays for your junior and senior year, and then provides three years of hands-on work training after graduation. It also allows me to get my foot in the door to explore healthcare careers and opportunities.

My first day on the Rockhurst campus I saw a banner hanging in the hall that said “Where Leaders Learn,” and I knew I made the right choice. In addition to my classes, I have joined clubs like SOL: which stands for Student Organization of Latinos. I also became a part of Alpha Phi Omega, a service fraternity, and cheered for the Rockhurst team.

I look forward to going back to school in the fall, knowing that I am one step closer to my dreams.
My gratitude for the support my family and I have received cannot be conveyed with words alone. I hope my actions show you that your support makes a direct impact on students like me.

Please continue to support the scholarship fund. Not just for me, but for my step-brother, who is currently enrolled in the middle school program at St. Cecilia. He took the deportation of his dad very hard; however, because of the support of the Graduate Support Directors at the school and the programming, he is learning to become an influential person, and I believe he will make an important difference for our community.