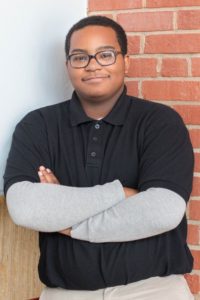 Below is a brief excerpt from Aaron Tucker’s speech from the 9th annual Access Academies Scholarship Dinner.

“My name is Aaron Tucker. I recently graduated from Bishop DuBourg High School, Class of 2017!

In high school, I was very involved with not only my academics but my extracurricular activities as well. Over the course of high school, I was involved in the Academy of Advanced Studies, National Honors Society, Student Ambassadors, Student Council, Robotics, Pro-Life Club, Theater, Liturgical Music, Choir, Math Club, Scholar Bowl, Video Gamers, and Anime Club.

I knew that even before I got to high school, I wanted to really be involved because I truly wanted to make my high school years memorable, and I believe that I achieved my goal. Well, I think that is enough for introductions because tonight is about raising money for this wonderful organization known as Access Academies. However, before we do that, I was asked to share a little bit about my experience with Access Academies. It has been a long and amazing journey, so bear with me.

I have been a part of Access Academies since my 8th-grade year at Saint Louis the King, formerly known as Cathedral Basilica. My 8th-grade year, they decided to implement this new program called NativityMiguel, and it was then that Access Academies would eventually become an integral part of who I am today. I remember it so vividly because when I cannot tell you how mad I was that my mother made me do this program. As soon as I was told that I had to stay at school until 5:00 P.M. every single school day except Friday, I became exhausted just thinking of such a reality. But alas, soon, it was my reality. However, I hate to be cliché, but this truly became a case of the saying, “don’t judge a book by its cover”, because the program surpassed my expectations by far. The program consisted of two main parts. The first was an hour long study period. I am not one that usually struggles academically unless it is Calculus- which did not kick in for another four years thank God, but it became really helpful when I just wanted to finish up homework so I can go home and work on programming or something. The second component of the program consisted of various activities and challenges that would ultimately help us in the long run. Some of these activities included resumé writing, making a portfolio, creating and presenting presentations, searching things like high schools and colleges that we took an interest in, and many other things as well. When it came time to conclude my 8th-grade year, I realized just how much Access Academies had done for me.

It did not stop there. Even in high school, Access Academies was still a huge part of my life. My family struggles financially, but through generous donors like yourselves and others like alumni from DB and from Mike McMillan and the Urban League of Metropolitan Saint Louis, they made sure that I was able to make it towards my senior year and graduate, which I don’t take for granted because I know that not everyone can say that, so I truly recognize this as a blessing. With that being said, I would just again like to say thank you for all of your continuous support to programs like Access Academies, because it truly does make a difference, and I hope that my being here is a symbol for that.

Another great thing about Access Academies is the different opportunities that the organization offered me through different ways to connect with people and really get some networking done, which everyone knows can take you a long way just by simply having connections. Through Access Academies and my school, I heard about this other program that I am also a part of now. I don’t know if you have ever heard of it, but it is called the Saint Louis Internship Program. As the name suggests, this program offers internships over the summer to underprivileged students in the Saint Louis area. I have been a part of this program since my sophomore year of high school. Since then, I had been a Corporate IT Intern with Emerson Electric, but now I will be going over to Saint Luke’s hospital and will be interning with their Computer System’s team. Many of the skills that Access Academies taught me such as presentation skills, resumé writing, leadership, adaptability, computer literacy, etc., I could apply those to not only my academic life, but in the workplace as well, so Access Academies has had integral part in my life and continues to be, even beyond its own borders.

Now, there is one specific person that I believe has had the biggest and most monumental influence on the young man that I am today, that would be my Graduate Support, Ms. Joslyn Sandford, perhaps the greatest thing that Access Academies could have ever given me. This woman has stuck by not only my side, but all of my fellow peers from Saint Louis the King, ever since my 8th-grade year. Everyone has someone in their life that keeps them together, no matter how hard they have to knock some sense into you along the way. I have always looked forward to seeing Ms. Joslyn when she would come to visit and check on my progress at DuBourg. Most of the time, I had no problems so we would inevitably just end up sitting and talking until I had to return to class. From the bottom of my heart, I love you Ms. Joslyn, and I have no idea what I will do next year in college when I have no one to knock some sense into me, but I know that as long as I know you have faith in me, I will be just fine.

In conclusion, I simply want to leave you with a quote from author H Jackson Brown Jr that says, “Nothing is more expensive than a missed opportunity”. I like this quote because I feel that everyone can relate to it.
Because of the education I have received through Access and Bishop DuBourg High School, I have applied and been accepted to 49 colleges, 39 of which gave me extensive and prestigious scholarships, and as a result, I have around $2.9 million dollars in college scholarships. I had offers and scholarships from schools like Truman State, SLU, Loyola University (New Orleans and Chicago), Rockhurst, Tulane, University of Dayton, Xavier University (both Cincinnati and New Orleans), and countless more.

Finally, I eventually made a decision, as I will be attending Missouri University of Science and Technology, or Rolla, or S&T for short. Imagine making that decision and having to tell 48 colleges that you won’t be attending their school. Not fun whatsoever. At Missouri S&T, I plan to double major in Computer Science and Computer Engineering with a minor in business.

As a first-generation college student, I have set high, but achievable, goals for myself, and to be a role model for my two younger brothers as well. I want them to know that if they truly put their best effort towards something, then not only will they succeed, but they will thrive. With that education and eagerness, I hope to become a computer applications developer, and ultimately, become a pioneer and entrepreneur in the technological field.

Life is full of choices and opportunities, and everyone struggles with worrying about whether or not they make the right decisions. However, I can tell you all tonight that the decision that you made to invest in Access Academies and these young students was the right decision. These are students who have taken advantage of the opportunity that you have and will create for them. I know that when the time comes, they will be exactly where you are right now, carving the way for the future generations of leaders, politicians, scientists, mathematicians, writers, programmers, entrepreneurs, who will inevitably create a better tomorrow. Thank you.”